A cellular protein whose normal function appears to suppress bone formation may be a potential new target for treating osteoporosis, according to a collaborative study led by Weill Cornell Medicine and NewYork-Presbyterian investigators.

In the study, published July 29 in Nature Communications, researchers discovered that mice lacking the cellular protein SLITRK5, found on the surface of bone-forming osteoblast cells, built more bone tissue than their SLITRK5-expressing kin. Laboratory experiments from the mice confirmed that the difference is principally due to the cellular protein’s absence.

Cells expressing the protein SLITRK5 are marked with magenta (left) and a marker of bone-forming osteoblasts in green (middle). These markers were viewed in the spongy bone in the marrow space (top) or on the outer layer covering the bone (bottom). Overlap between these two markers (right) shows that SLITRK5 is in bone-forming osteoblasts but not other cell types, helping make SLITRK5 a target for the treatment of skeletal diseases.

“This cell surface protein is a new negative regulator of bone formation,” said senior author Dr. Matthew Greenblatt, an associate professor of pathology and laboratory medicine at Weill Cornell Medicine and a pathologist at NewYork-Presbyterian/Weill Cornell Medical Center. “Those are really the most valuable genes for us to discover, because when we inhibit them with an antibody or by other methods, they could augment bone formation and be potential therapeutic targets for osteoporosis and related disorders.”

Osteoporosis, a systemic condition in which bones are prone to fractures due to insufficient density, is the most common bone disease, afflicting about 10 million people in the United States alone. The disease is especially common in women, with nearly 20% of women over age 50 having osteoporosis, and over half exhibiting the precursor condition of low bone mass.

“Clinically, we have very few ways to build bone, and all of those ways are associated with potential drawbacks,” he said, “so having additional pathways that we can target to build new bone would open up new treatment models for not only osteoporosis, but other disorders of skeletal fragility.”

Greenblatt’s laboratory has long sought to address that need. In the new work, he and his colleagues began by looking for novel proteins that are especially active in osteoblast cells.

A screening experiment revealed a long list of genes expressed in osteoblasts but not other cell types. Greenblatt and his colleagues then filtered the list to highlight gene products predicted to be secreted or displayed on the cell surface, which would be the easiest proteins to target with antibody drugs.

“What jumped to the top of the list was a gene that had almost no previous studies on it, called SLITRK5,” Greenblatt said. 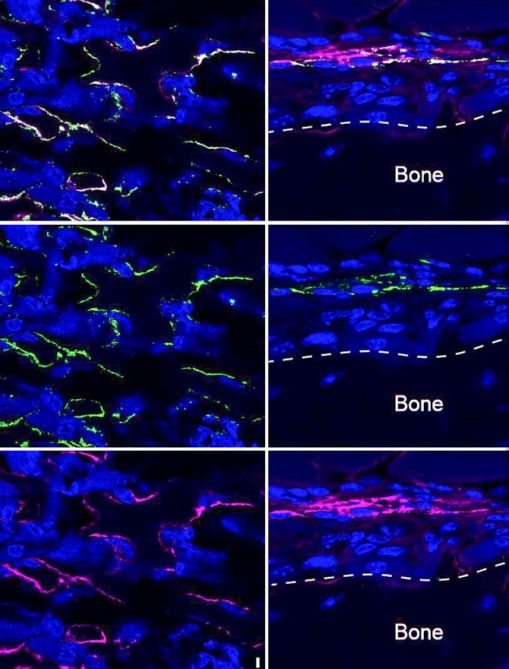 Cells expressing the protein SLITRK5 are marked with magenta (left) and a marker of bone-forming osteoblasts in green (middle). These markers were viewed in the spongy bone in the marrow space (top) or on the outer layer covering the bone (bottom). Overlap between these two markers (right) shows that SLITRK5 is in bone-forming osteoblasts but not other cell types, helping make SLITRK5 a target for the treatment of skeletal diseases.
Dr. Matthew Greenblatt and Dr. Jun Sun/Provided

“It was a surprising finding that SLITRK5 was involved in regulating bone formation,” Lee said. “However, my lab’s own work on this gene was initiated by a previous serendipitous discussion I had in the hallway with Dr. Shahin Rafii (’82), director of the Ansary Stem Cell Institute at Weill Cornell Medicine, whose lab initially identified SLITRK5 in hematopoietic stem cells. That discussion led to our collaborative work on this gene over the years.”

The scientists in the Lee and Greenblatt labs quickly teamed up and began dissecting the osteoblast-specific functions of SLITRK5, discovering its bone-suppressing function. Further work revealed that SLITRK5 acts specifically by inhibiting the action of the well-studied signaling protein Hh, known as “hedgehog.” Previous efforts to promote bone formation by boosting hedgehog activity have failed, though.

“Part of the reason for the lack of progress in harnessing the hedgehog pathway is that hedgehog does so many important things that augmenting hedgehog activity was seen as dangerous,” Greenblatt said.

SLITRK5 seems to be much more specific. Though deleting the gene from mice increases their rates of bone formation, it doesn't cause any overt skeletal defects. “They do build more bone,” Greenblatt said “but the shape of their bones is normal, and the development of the skeleton is normal, so that was all reassuring.”

The lack of major side effects suggests that drugs targeting SLITRK5 aren’t likely to cause problems, at least in skeletal growth.

Along with Lee and collaborators from Xiamen University, the University of Massachusetts Medical School, LegoChem BioSciences, Hospital for Special Surgery and the Tri-Institutional Therapeutics Discovery Institute, Greenblatt’s team is now trying to turn the findings into an osteoporosis therapy.